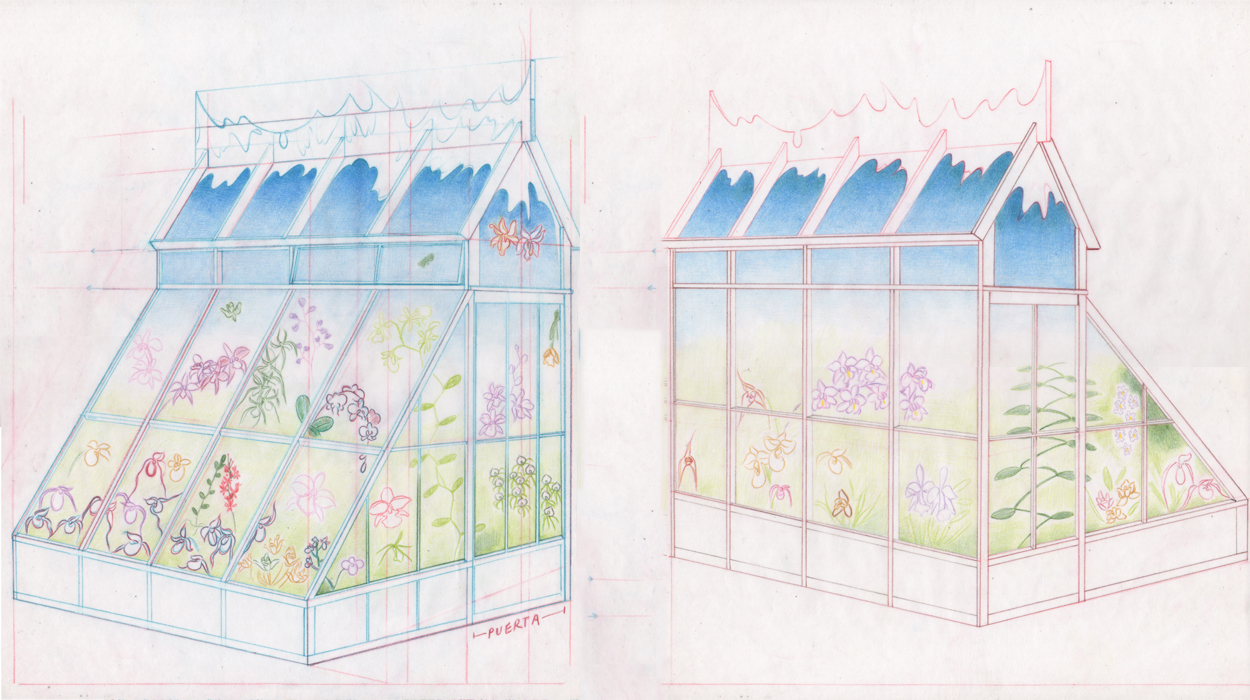 Barrios developed a greenhouse, which is the central piece of the exhibition, it alludes to nineteenth-century botanical spaces, and it’s one of the artist’s most ambitious works to date.

The show also includes drawings from the series Buddhist Visions of Hell (2019-ongoing). These drawings present surrealist, mythological-botanical worlds where orchids are the protagonists.

With a text by Joaquín Segura

Once again, we are hungry for lynching:

The first historical precedent of a greenhouse is recorded in the very extensive Natural History of Pliny the Elder: it tells that Roman emperor Tiberius -the one that the same naturalist referred to, at another time, as tristissimus hominum, the saddest of all men- should eat, by medical recommendation, a daily snake melon: a vegetable from the cucurbitaceae family. Thus, structures were built that moved in such a way that they could take advantage of sunlight during the day and be sheltered in a practical way at night or when the weather conditions were not optimal, aided by an ingenious use of oiled fabrics and mica slabs that allowed controlling the temperature variations to which these crops were exposed throughout the different seasons of the year.

In the modern era, the sophistication of this principle is inextricably linked tothe times of Great Explorations and, subsequently, to the voracious imperialist expansion of European powers: hence the most significant advances in this method of cultivation occurred in 13th Century Italy, 14th Century France and 17th Century Netherlands, highlighting the obsession with these structures in Victorian England, and the universe of implications they entailed.

The history of the greenhouse is, in a certain way, the crystallization of the immemorial trope of the eternal -and futile- battle of man against nature; after all, we could think of this struggle, which also implies a clash between the practice of architecture and the obsession with the landscape, as a persevering effort to create a world within another, thus establishing a fragile domain in this manufactured time and space.

However, in this liminal space there are certain shadows, beyond those projected by postcolonial connotations: environmental overexploitation and the devastating consequences of the industrialization processes that accompanies this story. It is significant to remember that Pliny died asphyxiated by the toxic gases emanating from the pyroclastic flow of the eruption of the Vesuvius in 79 CE, in a desperate attempt to more closely observe that terrible Nature that, despite our own selves, surpasses us sublimely and immeasurably.

In 1981, Rupert Sheldrake, an obscure British researcher who, until then, had moved freely between interests as diverse as advanced biochemistry, plant physiology, Hindu philosophy, and transcendental meditation, postulated a theory that earned him the resounding rejection of the international scientific community: Morphic Resonance. In A New Science of Life, Sheldrake argues that there is a certain class of self-contained knowledge system that condition sboth biological and cultural, perceptual, and ethological phenomena as they are transmitted from generation to generation in all kinds of natural systems. Although, up to this point it might sound like an approach akin to Lamarck and more traditional evolutionary biology, this matter becomes progressively esoteric: it establishes the possibility -among other fascinating eccentricities- that social groups of interspecies individuals are capable of communicating at a distance by using a shared ancestral and cumulative memory that lasts and is manifested through Terrestrial magnetic fields. In other words, each species on this planet participates in a tragic circumstance: a shared past, present and future from which it is completely impossible to escape.

Javier Barrios presents a group of new works made between 2019 and 2022. A certain phantasmagoria lives in this set of explorations, one that moves freely between references as accurate as they are dislocated: ukiyo-e, primitive Flemish art, traditional botanical illustration, and Mesoamerican and Buddhist iconography all merge into a visual world as virtuous as it is inventive.

Beyond the perversity of the sensual panorama we are invited to, perhaps the greatest success of his recent work lies in the dexterity with which Barrios creates a pareidolic nightmare that irrigates on all of this and nothing at the same time. These proposals show an artist who has found his own visuality and narrative from both destructuring and a deep understanding of his referential universe, his characters, and exotic obsessions. This non-canonical approach to his production is revealed even more refreshingly when placed in direct opposition to the worn strategies explored by a contemporaneity of immediate and disposable consumption: these images are closer to the terrifying idea of ​​the kalpa than to the strident and fickle imposture of social media.

In the sculptural installation that stands as the central axis of the exhibition, a disturbing detail is present in its subtlety. In one of its panels, a multitude of anthropomorphic orchids expectantly watch the moment that precedes a bird attacking a moth. In apparent reaction to the superb violence of the scene, their countenances blur in either celebratory rapture -or even sheer terror- at what could be a restrained parable about a lynching caused by a phobia of difference. In another of the shown works, the petals of a peony are transmuted into a representation of fire that could refer us to the Lotus Sūtra, one of the most revered sacred texts in the Mahāyāna tradition. In one of his passages, existence itself is a house on fire and if we don't wake up to pain, it will end up consuming us.

One wonders about the limits of these feverish and intriguing paraphrases; I must also note that I can't help noticing a certain punk sensibility already present in Barrios’ previous work and that, at least for me, makes the work present in Casa de sombras so seductive. It is there as before but it is, at the same time, different: perhaps more mature and disenchanted. Meanwhile, Javier Barrios throws himself -in his words- now drawing living things. 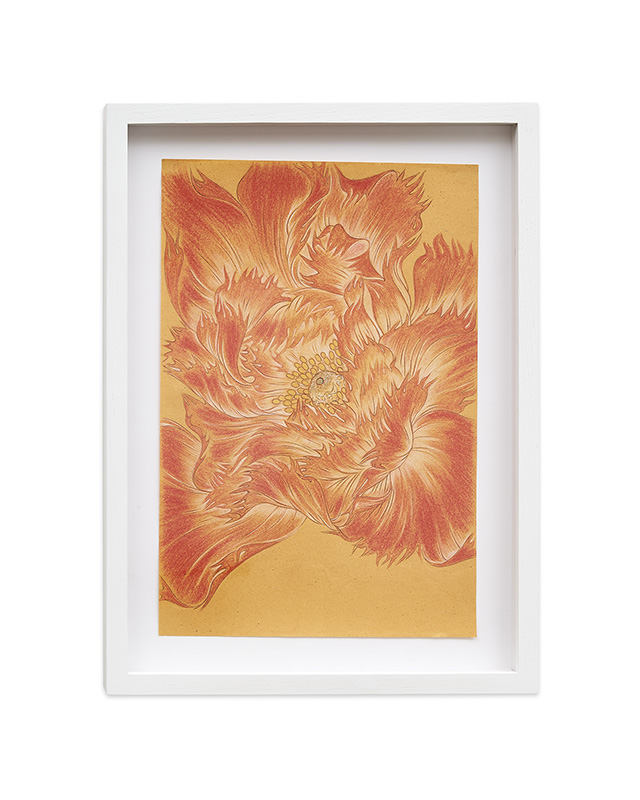 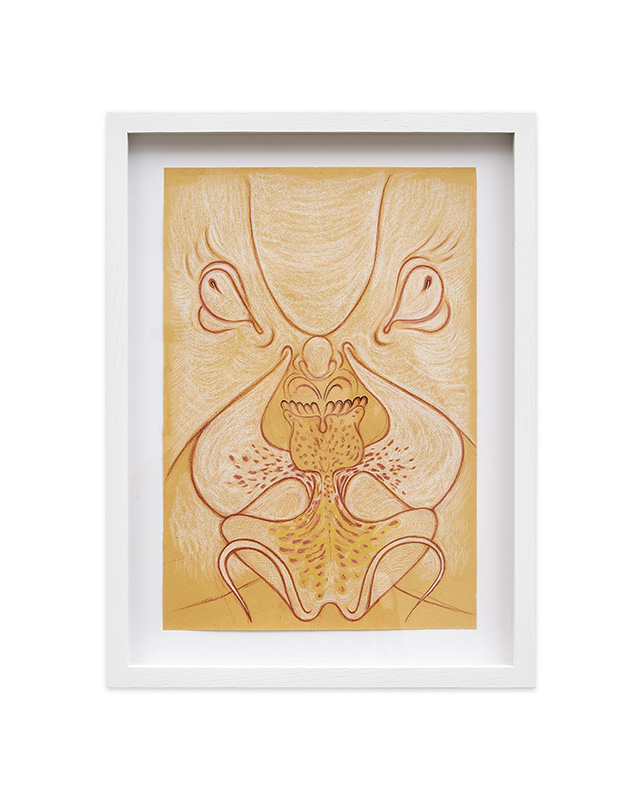 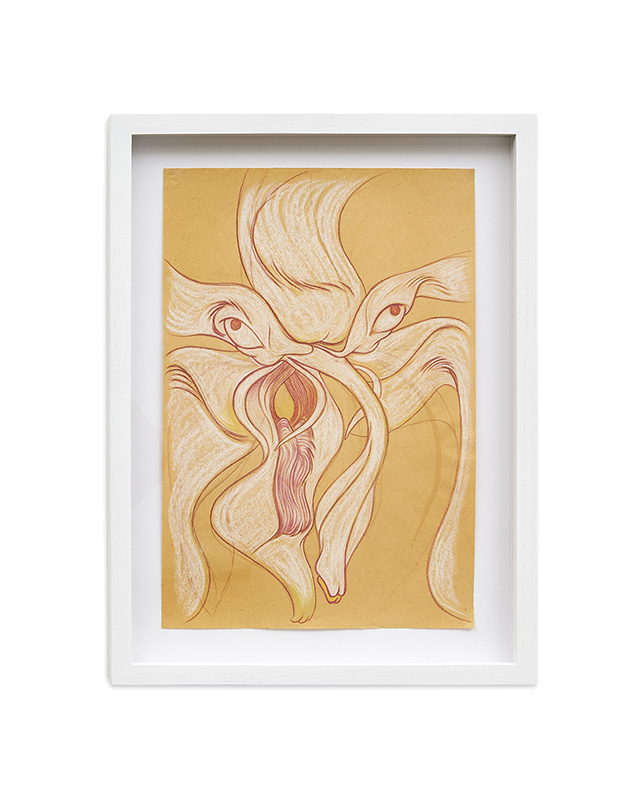 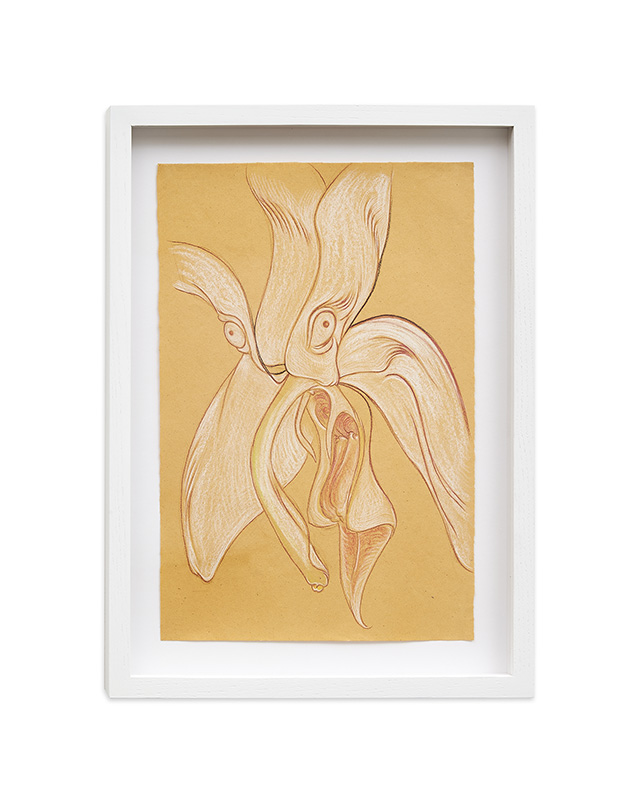 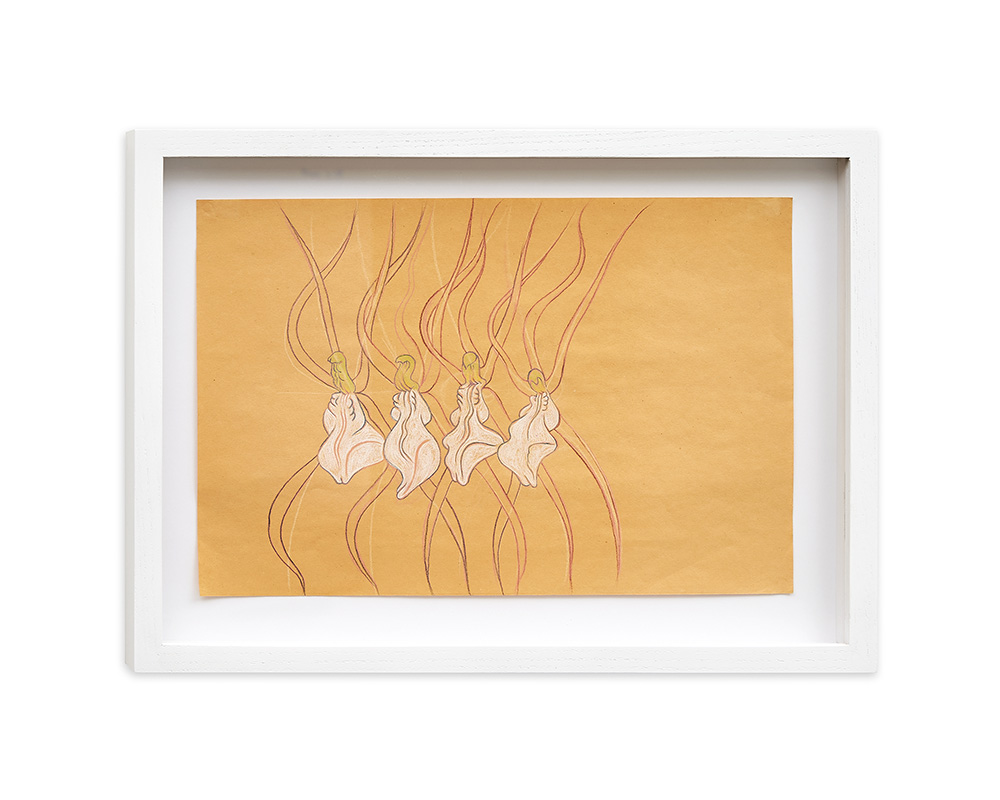 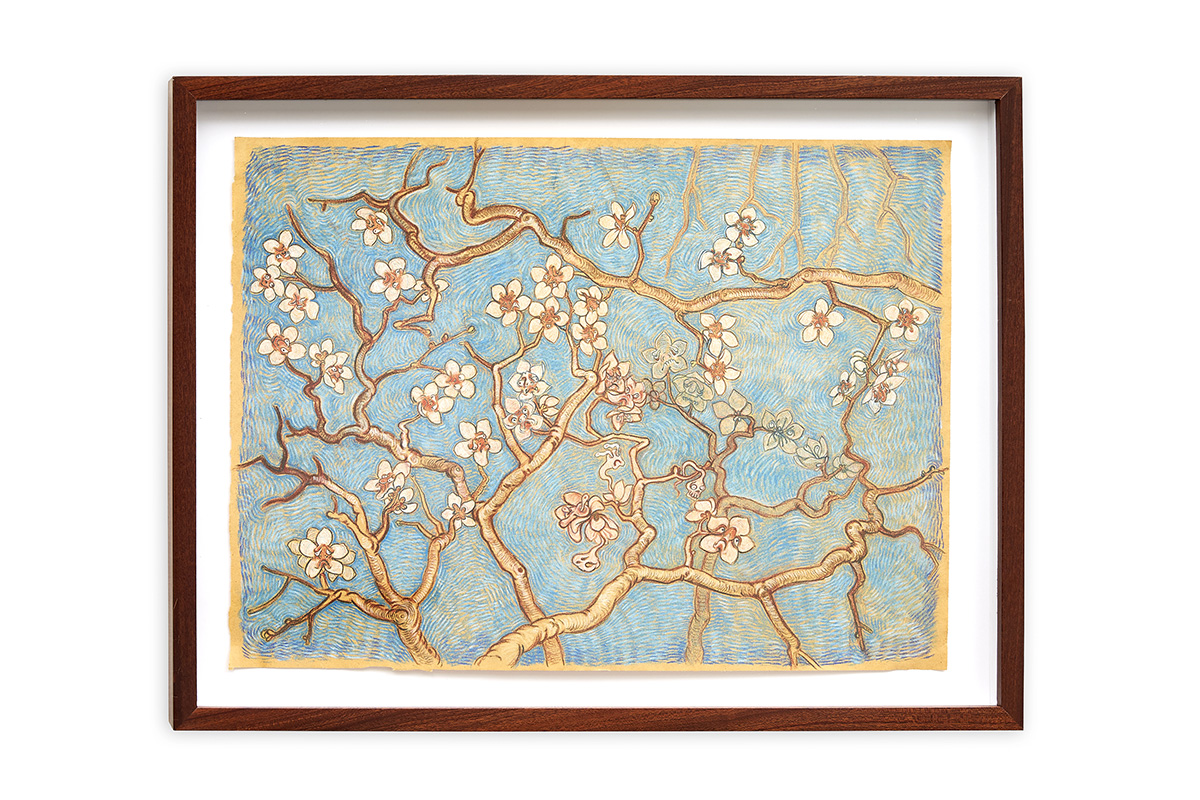 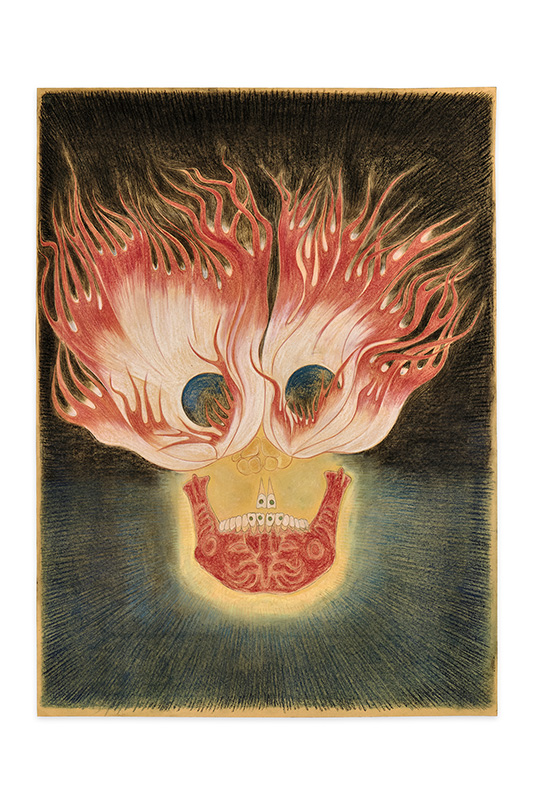 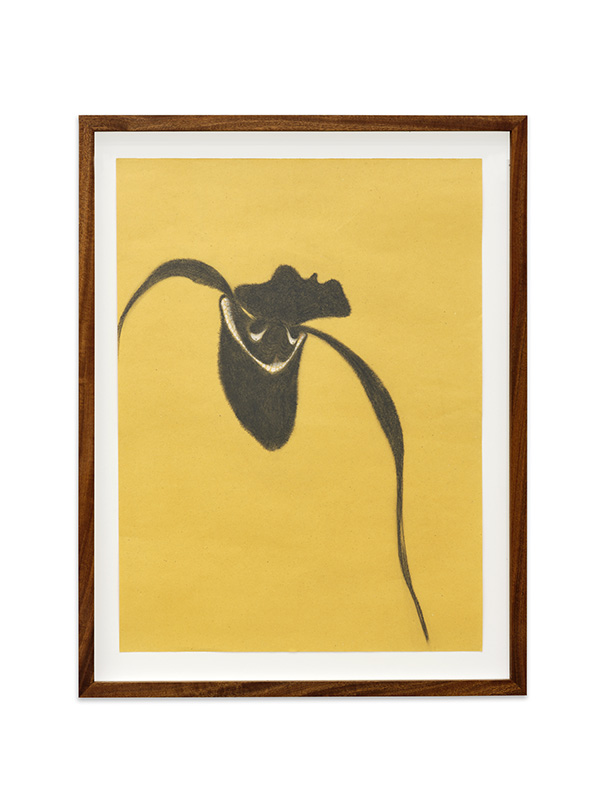 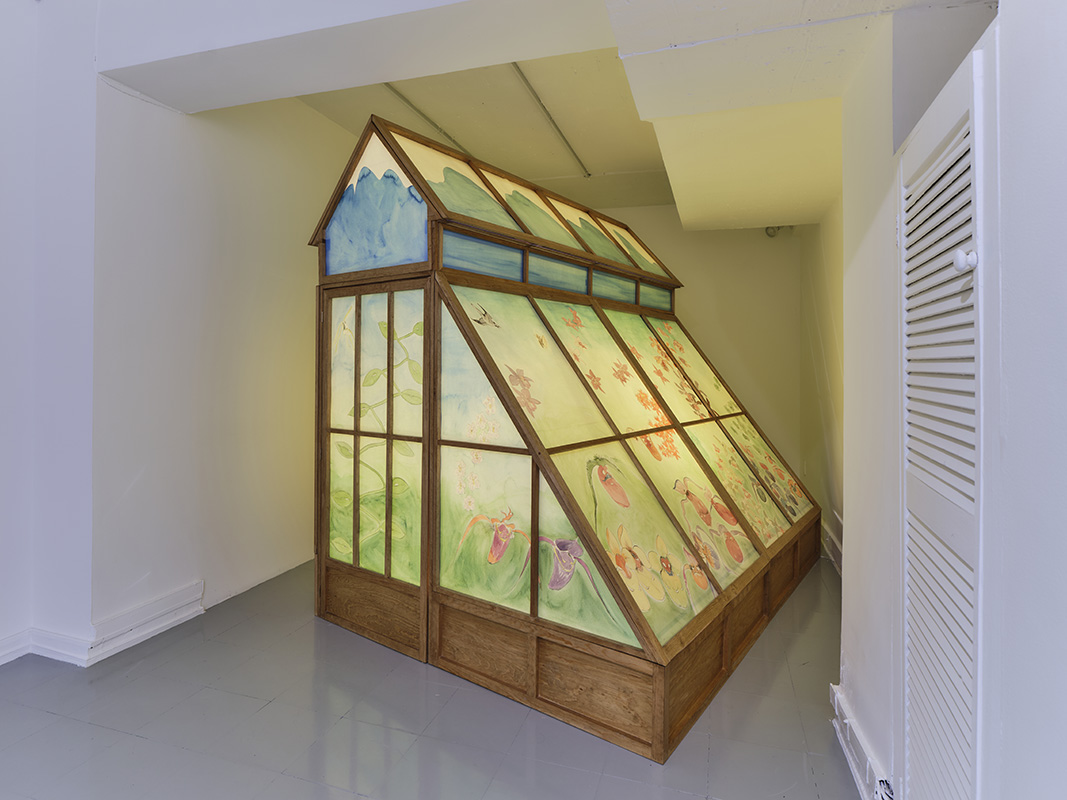 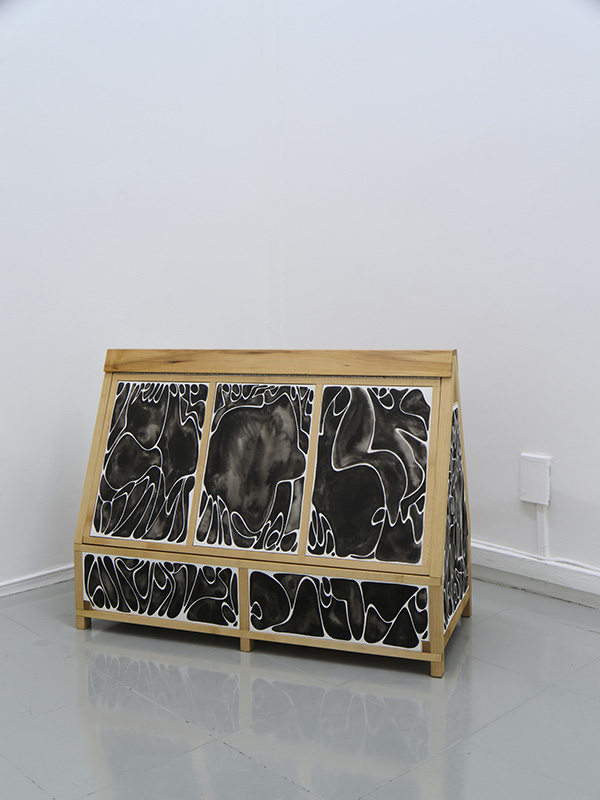 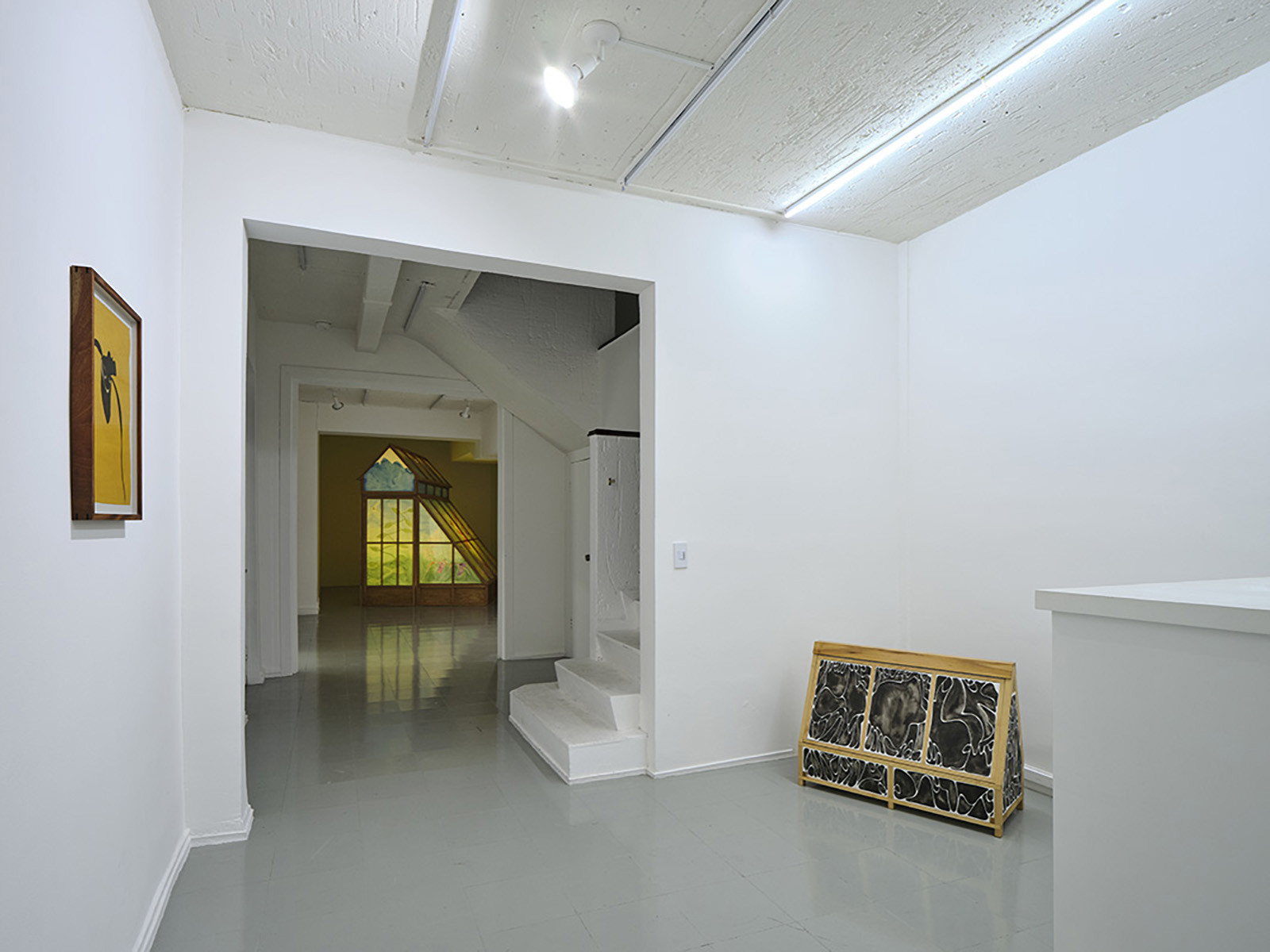 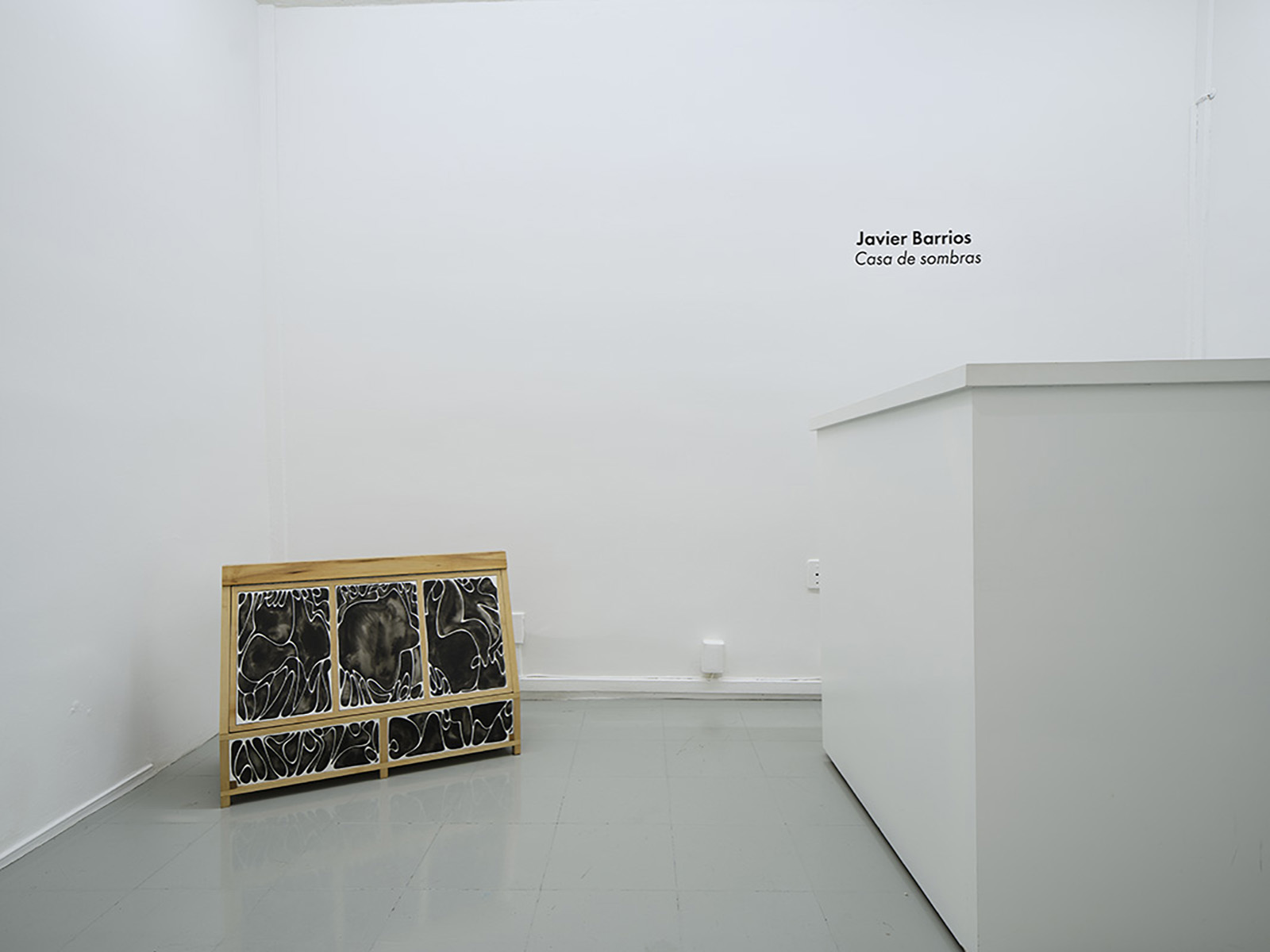 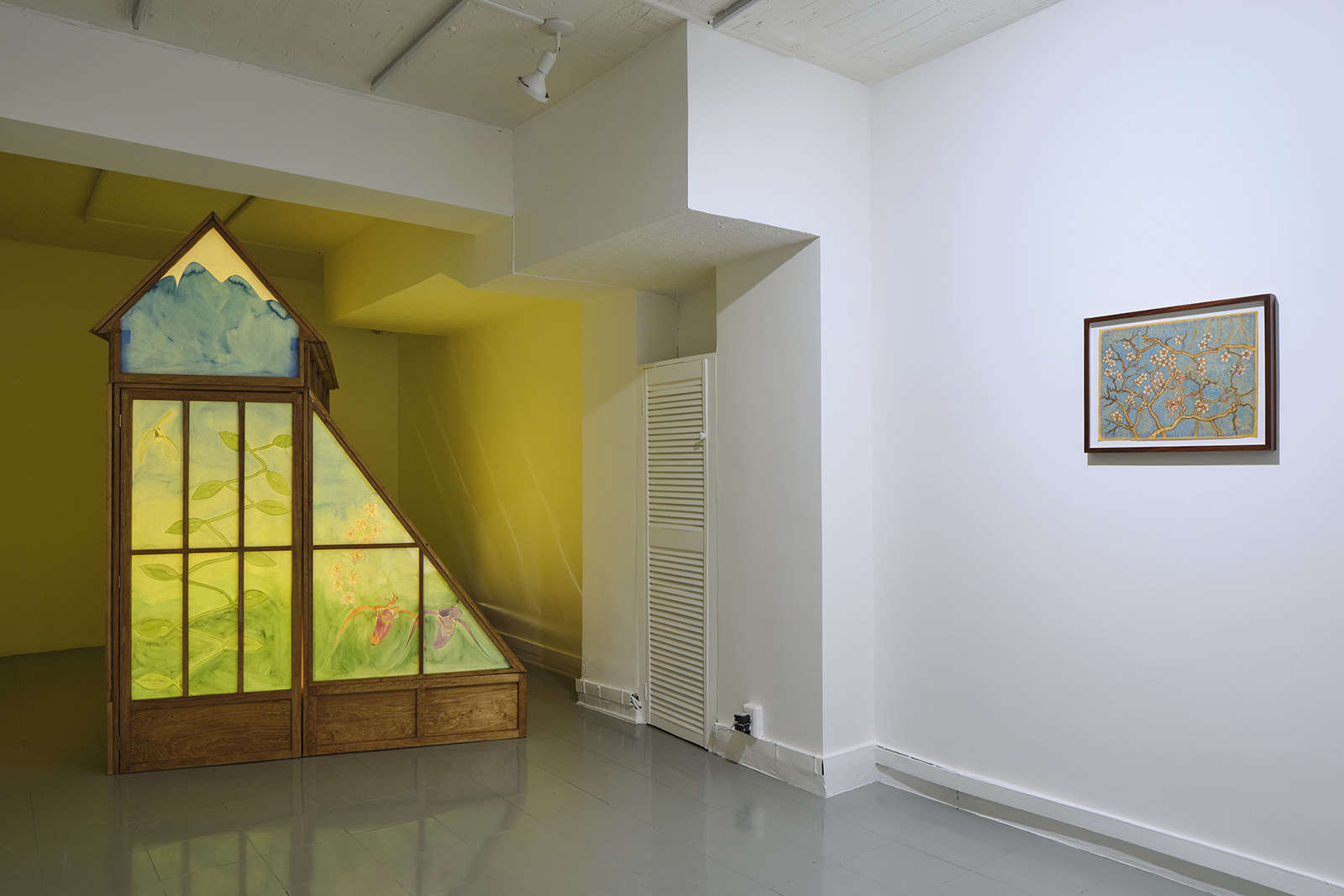 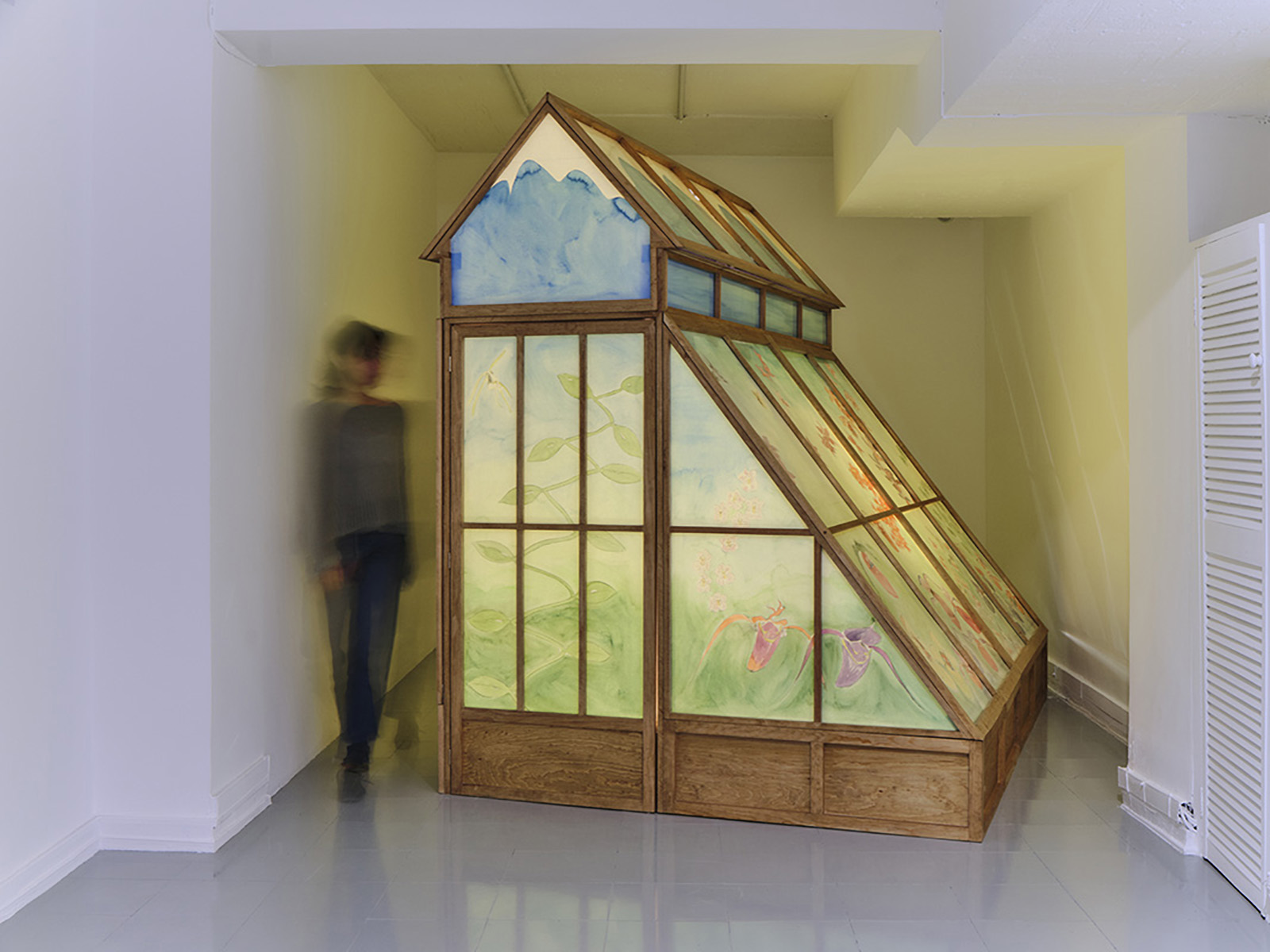 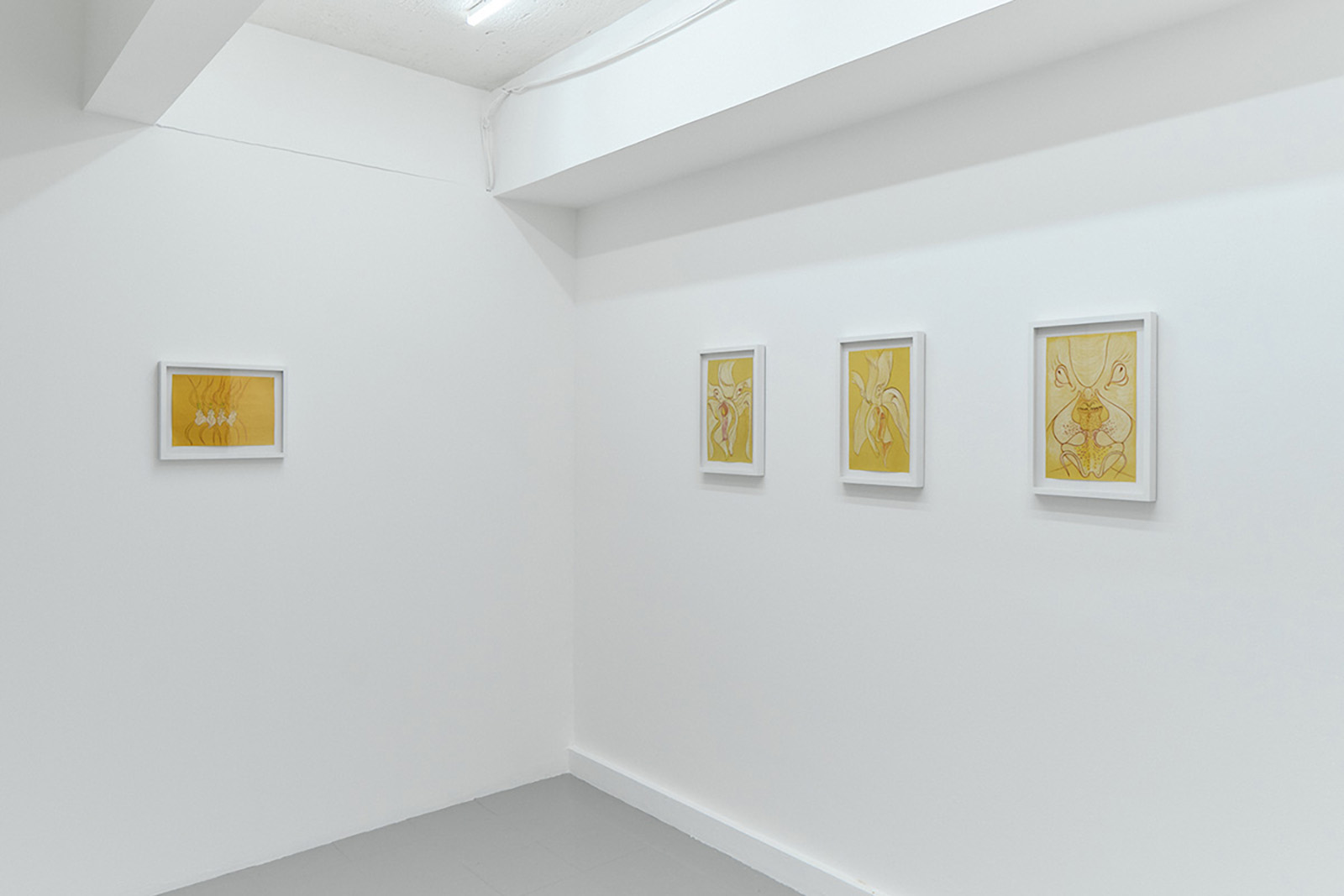 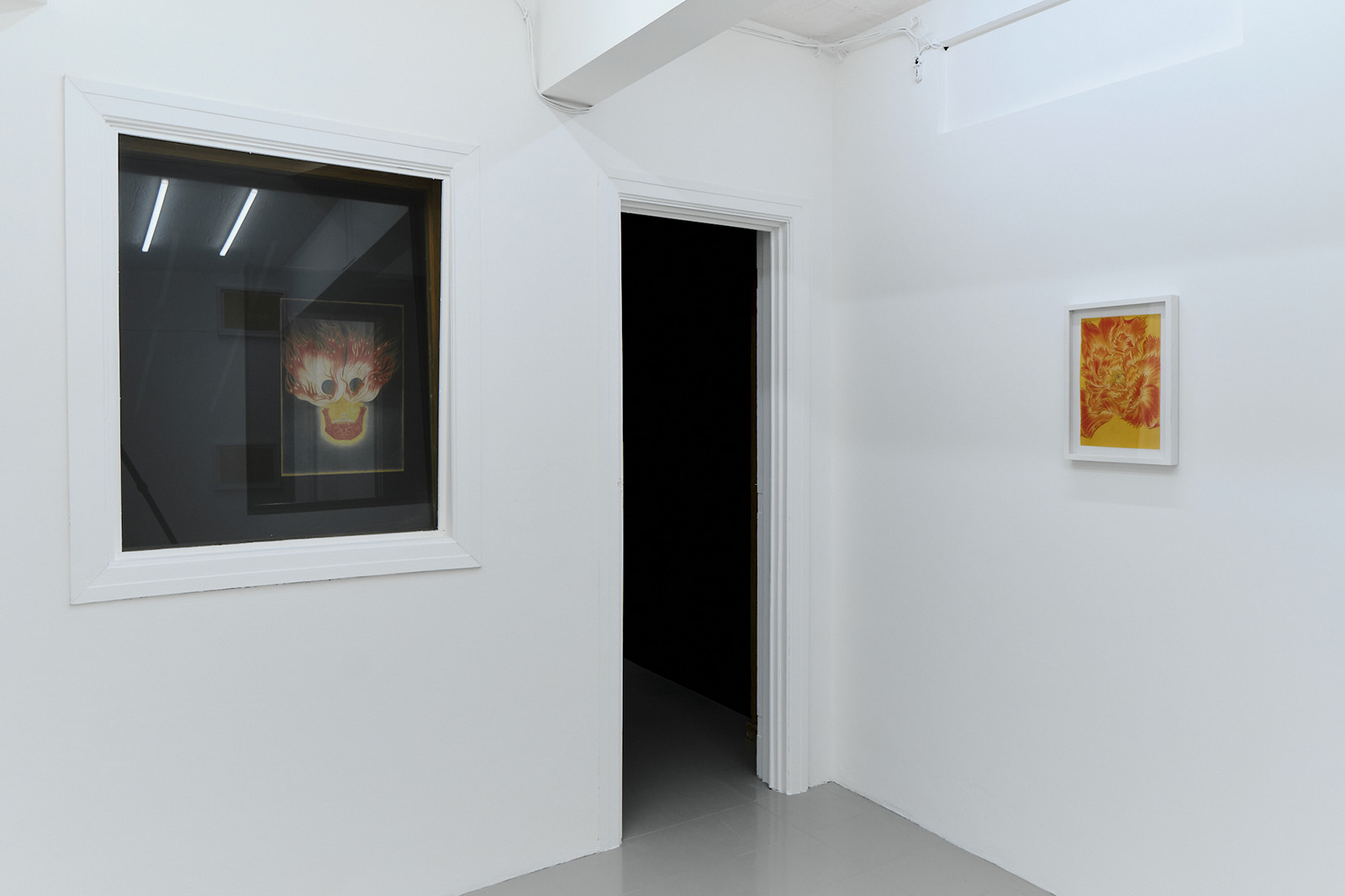